NCDA Contributes to the Career Literacy of Young Adults

These are just a few of the questions that were part of the initial gathering at the U.S. Chamber of Commerce in Washington DC in late February. The theme of this meeting was “Reviving the American Dream by Using Career Development to Prepare All Young Adults for Career Success.” Numerous NCDA members joined with members of other organizations to discuss and strategize plans for this nation-wide project. 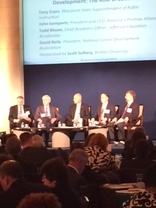 Prior to this two-day event, NCDA members Ray Davis, Mark Danaher and Niel Carey were a part of the steering committee and kept NCDA on the forefront for  this important national meeting. On the first day of the gathering, Leo Reddy, CEO of the Manufacturing Skill Standards Council (MSSC), hosted a reception for many of the participants.  It was a great way to first meet and then mingle with others that were passionate about the theme.

Key Topics, Discussions and Responsibilities
An interesting discussion occurred during a private dinner with Mr. Reddy and his son Neil (Executive Director of MSSC)  along with Jan Bray (formerly Executive Director from the Association for Career and Technical Education, ACTE, and principal author of MSSC- SME June 2015),  Jeannine Kunz and Pam Hurt, SME (Society of Manufacturing Engineers) and William Symonds, Director of the Global Pathways Institute. The discussion revolved around key responsibilities that the “career counselor” would perform in a high school setting. In regards to the person to be placed in each high school, we revised the term career counselor to school career development coordinator. This change in terminology resulted from the realization that this person would not be conducting many one-on-one meetings with students, as a traditional career counselor would do. The school career development coordinator would do more industry/corporate outreach, career planning activities, understanding/sharing labor market data and certifications, etc.

The main event at the US Chamber of Commerce was very well attended.  Approximately 240 people listened to great speakers and panel members. David Reile was a panelist on “Meeting the Challenge of Providing High-Quality Career Development: The Role of Education”.  The other NCDA reps  were either note-takers or facilitators. At the end of the meeting the “conveners” asked for reports from the breakout groups, and will compile a summary of “Key Recommendations.” 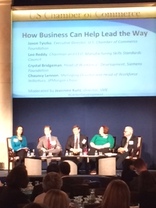 The follow-up session last 90 minutes and was attended by NCDA members Niel Carey, Ellen Weaver-Paquette, and David Reile.  Several others, including Bill Symonds, Scott Solberg and Leo Reddy were in attendance and leading the meeting.  Next steps were discussed and included the need for collecting, collating, and disseminating the results of the 20+ table discussions from the main meeting.  This should result in a “white paper” which is to be distributed to participants within the next several months.  Mr. Reddy proposed that Bill Symonds organization, Global Pathways Institute, play the role of “secretariat” for future of these discussions and action items.  While not “voted on,” everyone seemed in agreement with this.  It was suggested that the sponsoring organizations contribute financially to this as well as asking for a large business or non-profit to sponsor it.  No decision was made on this.  The Chamber representative, Jason, suggested that information be disseminated in various blogs and industry publications to keep the conversation going and to continue to encourage participation in this endeavor.  This was agreed to and various members offered their blogs and publications as vehicles for this. Finally, it was agreed that conversations should continue and that representatives should attend the Southwest Pathways Conference May 2-4 in Arizona and NCDA’s Career Development Conference in Chicago. Bill Symonds echoed this follow-up by stating, “A critical point is that we will be produce a draft white paper/call-to-action, and that we’ll be discussing this both at the Southwest Pathways Conference and then again at the NCDA Conference.  These conversations will in turn lead to adoption of the call to action by the steering committee, and then formation of the coalition.”

Funding for this Project
Leo mentioned that it would take approximately $2 billion to place a School Career Development Coordinator in each of the US High Schools.  He had several ideas of how to accomplish this goal –one is to raise the funds from the manufacturing and corporate world.  He’s very passionate about this – and is looking to NCDA as a key player to move this initiative forward with creating the credential needed for this in-school person.

Moving Forward to Prepare Young Adults
Overall, it was an interesting gathering – now let’s see what happens.  We have many champions behind all of the great work the we do as career professionals and NCDA members!  A HUGE thank you to Niel Carey for his hard work and dedication in making sure that NCDA was a key player in these events. David Reile, NCDA President Elect, happily summed it up saying, “I have no way of knowing if any or all of these ideas/visions will come to pass.  However, if they do NCDA should have a role to play. It is also very affirming from a professional standpoint to see and hear from so many non-career development practitioners about how important our work is and how much it is valued and needed.” 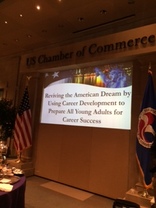