Garry Walz, passed on December 5, 2016. Jeanne Bleuer his loving partner, collaborator, and career development scholar herself completed this interview to offer insights about “later chapters” and navigating a lifetime of transitions. Those knowing Garry will find his humility, kindness and boundless capacity to honor others expressed in Jeanne’s voice.

This Later Chapters project seeks to add to the knowledge base of ageless aging, transitions, and questions critical to the developing career development leaders. This is Career Convergence's second article on an experienced NCDA leader. (Read the first feature in this interview series on Nancy Schlossberg.) 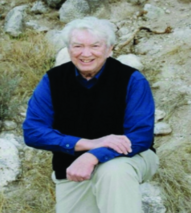 Dr. Garry Walz, was Professor Emeritus of the University of Michigan and Chair of the Counselor Education Department. He was past president of ACA (APGA), ACES, and NCACES, Founder and Director of the ERIC Clearinghouse on Counseling and Personnel Services (ERIC/CAPS) at the University of Michigan, and Co-Director of the ERIC Clearinghouse on Counseling and Student Services (ERIC/CASS) at the University of North Carolina at Greensboro. He received numerous awards from ACA, ACES, IAMFC, and NCDA, including the Gilbert and Kathleen Wrenn Award for Humanitarian Service and the NCDA Eminent Lifetime Career Award. He was the author of numerous books and journal articles. The ACA’s Garry R. Walz Trailblazer Award recognizes an individual who exemplifies a trailblazer in the counseling profession. One that has created an idea or concept that stands out both in originality and practicality and demonstrates a personal commitment to enact it.

Q: What helped Garry to gain his voice within the field?

There were three major avenues through which Garry became a leader in the field. First, he established one of the early NDEA Institutes for counselor educators. Second, he ran for and won presidencies in NCACES, ACES, and APGA. Third, he made the case for establishing a clearinghouse for professionals in counseling fields as part of the network of ERIC Clearinghouses and then went on to successfully compete for the contracts for those clearinghouses until all clearinghouses were discontinued in 2003.

In his early years, he was most influenced by his advisors, Bill Dugan and Gil Wrenn. He kept a close relationship with Gil and Kathleen Wrenn, visiting them frequently after they retired in Tempe, Arizona. When Gil wanted to write one last book on what he had learned throughout his lifetime, Garry helped him organize, edit, and publish Intelligence, Feeling, Caring: Some Personal Perceptions.

Throughout his years as a counselor educator at the University of Michigan, he worked closely with and was highly influenced by his doctoral students, always open to learning new concepts from their dissertation topics. These students (e.g., Robert Smith, Julie Miller, Jane Goodman, and Marge Mastie) went on to hold leadership positions in the profession. He hired me (Jeanne Bleuer) when he wanted to learn more about how technology could be used in counseling.

In his later years in the profession, Garry continued to actively learn through his collaboration with practicing professionals who had expertise in a wide range of areas, e.g., Rich Feller, Norm Gysbers, Pat Henderson, Dick Knowdell, Pat Schwallie-Giddis, and Martha Russell.

Q: To what degree did Garry live a life following a theory of career development over a lifetime?

Garry did not follow a specific theory of career development. He pulled what he thought were the best concepts from each in living his own life. Garry continuously sought ideas from other disciplines (e.g., business) that could be adapted for use in life/career development and would enhance the effectiveness of career development programs. Ever the career counselor, Garry would frequently ask young waiters and waitresses what their education and career plans were. Even in his final months, Garry spent many hours talking with his assisted living caregivers and helping them make decisions about further education options and career goals.

Garry never seemed to lack confidence in his ability to complete whatever he set out to do. He never wasted time grieving about things that didn’t turn out the way he would have liked. When the U.S. Department of Education proceeded to close all the ERIC Clearinghouses despite numerous protests across the country, Garry shifted his focus to using the ACA-sponsored VISTAS project to pick up the ball that the government dropped. At the time of his death, VISTAS had produced over 1000 new online documents written by counselors for counselors. Many of these documents were written by new professionals with gentle guidance from the VISTAS editors. Needless to say, these experiences gave these young authors confidence to write and submit articles to professional journals.

Q: What’s the benefit of hindsight? In hindsight, what opportunities might Garry have taken?

Garry often expressed regret that he hadn’t specialized in one area as Norm Gysbers did with Comprehensive School Guidance Programs. The only other opportunities that he ever expressed regret in passing up were specific small project RFP’s – even though there was no way we could have come up with the time and effort needed, given what was already on our plate!

Q: What natural tensions were a theme in Garry’s life?

I think (and Garry agreed) that in today’s world, he would have been labeled ADHD. He loved the excitement and challenge of going for funding for a new project, but quickly lost his passion for it when he won the competition and something else grabbed his attention. Chuck Lewis, the former Executive Director of APGA, once told me that much of Garry’s success could be attributed to his ability to attract competent staff to manage the implementation of the ideas he had.

As with most actively involved professionals, Garry struggled with balancing attention to career and family. Although there’s no doubt that his career occupied most of his time, he managed to be there for his children when they most needed him and for all major events such as birthdays, holidays, graduations, etc.

Q: What were Garry’s thoughts about how he understood his later chapters?

Intellectually, Garry understood the “common wisdom" about retiring and finding new avenues to explore as you age. He also understood the writings of Kubler-Ross about death and dying. He just didn’t think any of it applied to him. Fortunately, VISTAS gave him the opportunity to remain active professionally well into his 80’s, during which time he continued to dream up new ideas for books or projects. His major goal was to write a book about his own experiences in dealing with the psychological, social, and health challenges he faced. In 2004, Garry was diagnosed with an advanced stage of prostate cancer and was given 2-3 years to live. He didn’t accept that and, with the help of pain killers, went on to live 12 more years. For 10 of those years, he was very active physically, continuing to enjoy hiking and camping. Throughout his retirement, he followed his passion for photography, supplying photos for the covers of VISTAS publications and several ACA books.

Q: What advice would Garry have had for his younger self? What’s the most critical piece of advice he would want to share with new professionals to our field?

In his guidelines for writing VISTAS articles, Garry emphasized choosing a topic that you are passionate about. If you do that, you won’t have any trouble coming up with ideas for content.

In the same vein, I think Garry’s advice to both his younger self and new professionals would be to follow your passion in choosing the direction you want to take your life and career.