Dr. Norm Gysbers is recognized both nationally and internationally as one of the foremost scholars in school counseling and career counseling/development.  His work influenced the development of the National Model for School Counseling Programs which became the adopted model for other countries to follow. Moving school counseling from “random acts of guidance” to a planned program of services whose effects could be measured, his work made it possible for guidance services to be accountable. Dr. Gysbers served as the editor of the Career Development Quarterly, the Journal of Career Development, and co-authored one of the most authoritative textbooks on career counseling, Career Counseling:  Processes, Issues and 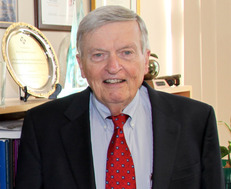 Honored as a Distinguished Curators Professor at the University of Missouri in 2008, his list of awards includes the Mary Gehrke Lifetime Achievement Award from ACA; President’s Award for a Lifetime Commitment to Career Development as well as the Eminent Career Award both from NCDA; Distinguished Faculty Award from the University of Missouri; and the William T. Kemper Fellowship for Teaching Excellence.

This is the fourth in the Career Convergence series of interviews with experienced NCDA leaders as they offer insights about “later chapters” and navigating a lifetime of transitions. This project hopes to add to the knowledge base of ageless aging, transitions, and questions critical to developing career development leaders.

What helped you to gain a voice within the field?

When I was a doctoral student at the University of Michigan I served as a graduate assistant in one of the first National Defense Education Act Institutes. Later in my graduate work I became a Lecturer in Education in another National Defense Education Act Institute under the direction of Garry Walz. Still as a graduate student, I became editor of the Vocational Guidance Quarterly (now the Career Development Quarterly) from 1962 to 1970. These experiences and the people I worked with as a graduate student brought me directly into professional association work which then resulted in my running for and winning presidencies in National Career Development Association and American Counseling Association.

To what degree have you lived a life following what you professed about your career development principles?

I have always viewed career development as a life-long learning process. As a result, I sought opportunities to continue to learn about ways to grow personally and professionally. Being an active participant in association work and by having a career as a professor, I was able to extend and expand my self-understanding and my professional knowledge and skills. Association work opened many doors for me to learn about my discipline and national, state, and local policies and practices. Work as a professor opened many doors and taught me how to connect and work effectively with students. Being an author provided me with the discipline and direction for my writing, helping me classify and sharpen my thoughts. Service taught me how to connect and interact with other professionals and with organizations internationally, nationally, and locally. Being open to and taking advantage of opportunities was my key to life-long learning.

When I found myself considering a professional opportunity, my first feelings were fear and self-doubt, believing that I would not be successful. What I learned was that the best way to deal with these feelings was to say yes rather than no, take on the opportunity seeing it as a challenge, and learn from it even if I failed. It gave me a way to become involved. By becoming involved I began to understand what the opportunity was and what the tasks were that needed to be completed. I realized that with hard work I could be successful. By taking it on, I gained self-confidence and began to feel that I had the power to successfully complete the tasks involved.

While in the Army, I passed up an opportunity to enroll in officer’s candidate school because I felt that the Army was not part of my future. As a professor at the University of Missouri I had several opportunities to become a department chair. I declined those opportunities because I wanted to continue my teaching, research, and service as a professor. I did not want to lose direct contact with students and the opportunities to continue my writing, research, and professional service.

As an active professional one of the constant tensions was balancing career and family. Professional work often required extensive travel taking me away from home, my wife, and my family. I tried to counter that by being home as much as I could and by taking my wife and sometimes my children with me on trips. Another tension was balancing the work of a professor; teaching, research, and service. I tried to always be careful in the assignments I took on to not focus on only one, neglecting the other two.

What are your thoughts about what is ahead for you?

The major goal in my life is to serve God through continued service to the profession of school counseling and all of the children, adolescents, and adults whose lives are directly influenced by the work of school counselors. While I want to continue to do some professional work, I do want to spend more time with my wife and family.

How is your biological clock impacting your choice?

While I am slowing down, I continue to be active in some professional work. I have learned the importance of exercise including stretching and lifting weights. Two years ago, at age 83 I decided to become a power lifter and I competed in a bench press and dead lift meet in Missouri where I won two gold medals. Also, I am increasingly less interested in doing the extensive traveling I did in the past.

What’s the most critical advice you want to share with new professionals in our field?

Understand the importance of time. The successful completion of most projects requires time-on-task. “It isn’t the 100th strike that cracks the rock, it is the 99 strikes before that.” I offer the word perseverance to them. It means continued effort to do or achieve something despite difficulties, failure, or opposition. It is persistence and tenacity in following your passion.

What one sentence would you use to describe the legacy that you hope to leave the field?

It is my hope that all schools will have comprehensive developmental school counseling programs that are fully implemented by school counselors and are designed to impact the academic, career, and social/emotional learnings of all students toward the goal of student success.

I was honored to have Dr. Gysbers on my Ed.S. program committee at University of Missouri-Columbia. What wonderful, positive ripples he has created in so many lives!

Rich, thank you for this wonderful addition to our knowledge about aging and transition.

Norm, your scholarship, your leadership and your service have been major factors in advancing the counseling and career development professions. Rich, your questions enabled Norm to continue sharing his wisdom and counsel.

Norm Gysbers was my first career counseling professor when I studied at the University of Missouri-Columbia. He inspired me with his passion for career counseling and for the good that we do in people’s lives. The trail he blazed became the blueprint for my career too, as NCDA and ACA presidents, as CDQ editor, as Eminent Career Award recipient, and even as Curators’ Dinguished Professor in the University of Missouri System. You are a very special person. Thank you.

Bravo, Norm and Rich. Many thanks for this moment, all the past and the rich future you both have laid the groundwork for.

Norm became my first professional mentor when I was working as a guidance supervisor in Wisconsin Dept of Instruction. He has continued to mentor me for more than 50 years now. This has resulted in a highly valued friendship. Dr Gysbers life legacy will be that he was a highly effective educator and mentor but also has lived a unblemished life of work, family and leisure that I stand in awe of.

I was honored to have attended training on the comprehensive, developmental guidance program presented by Dr. Gysbers many years ago. A few months following the training I contacted him to see if he would share more information with me as I was planning on teaching a school counseling class and wanted to teach my students about this new, innovative, progressive school counseling program and how it could make a difference in students' personal, social, and career development. I immediately heard back from Dr. Gysbers, and he was so gracious and sent me copies of all his slides (transparencies at the time) and I continued to use them in my classes for many years thereafter. I remember how impressed I was by his willingness to share as he continues to do so till this day. I am delighted to know he is still very much involved in the profession and continuing to share his knowledge, wisdom, and experiences with us. Thank you, Dr. Gysbers.

Thank you Norm for your support over the years, particularly while I was in the doctoral program at Missouri. It was much appreciated! Wishing you the best, Larry

Great and powerful article! Thank you, thank you!