Bridging the Gap: From Career Counseling Theory to Practice

Each year at The National Career Development Association (NCDA) Global Conference, NCDA hosts its Counselor Educator Academy (CEA), whereby a cohort of career development counselor educators gathers to discuss opportunities for strengthening the pedagogy of career development at the graduate level. Cohort members are exposed to new instructional strategies and resources, have the opportunity to dialogue with NCDA’s leadership, and identify a project that seeks to address a common issue faced by career counselor educators. More information about NCDA’s CEA can be found on NCDA’s website, under Professional Development.

A group of counselor educators, who participated in the 2018 NCDA CEA, have been moving forward on a project to bridge the gap between theory and practice. This project aims to address the challenge of helping counseling graduate students understand the relevance and application of career development theoretical frameworks to their future counseling practice. The inspiration for this project originated with the infamous “Three Approaches to Psychotherapy, Series I, II, and III,” often referred to as the “Gloria” Films of 1965, the “Kathy” Films of 1977, and the “Frank” Films of 1986, produced by Everett L. Shostrom for Psychological and Educational Films (Shostrom, 1965, 1977, 1986). Specifically, the “Gloria” Films demonstrate the respective theoretical frameworks of Carl Rogers, Friedrich Perls, and Albert Ellis with one client named “Gloria” (https://psychedfilms.com/). The CEA cohort attributes the effectiveness of the “Gloria” Films to the opportunity for counseling graduate students to observe the application of theoretical constructs in practice, whereby the unique constructs and impact of each orientation become potentially clearer and more distinctive through the focus on the same client.

One part of CEA project aimed at creating a video series itself similar to the “Gloria” films. The project name became Career Counseling Theory to Practice Video Series. The distinguishing factors of the CEA project are its focus on career development theories specifically, and its virtual counseling modality, reflecting a modern approach to today’s counseling practice, one that has become significantly more prevalent in light of the global pandemic.

The Career Counseling Theory to Practice Video Series needed to focus on a client who had a genuine career concern about which to authentically speak. Since members of the CEA cohort have noted students require more training in providing counseling to those from historically marginalized communities, it was important to find a client who held multiple marginalized identities. Viewing diversity from an intersectional perspective, the cohort acknowledged “the ways in which identities operate within systems of power, privilege, and oppression” (Cooper, 2017, para 3). The project included a client and counselors who held privileged and marginalized identities, specifically the client identifies as an African American Transgender man, thus a member of multiple historically marginalized communities. Counselors included members of privileged identities, such as white, male, and heterosexual identities. Alternatively, other counselors included members of marginalized identities, such as Black, Asian American, and female counselors.

A second focus of this project was to offer sessions through the platform Zoom. Initially, this decision was made based on ease of access for both the client and the counselors. A little over a year into our project, the COVID-19 pandemic quickly shifted our classes and practice online. Our hope is the videos convey how teletherapy can be a successful mode of career counseling and how this extends services to individuals who previously may not have had access to a 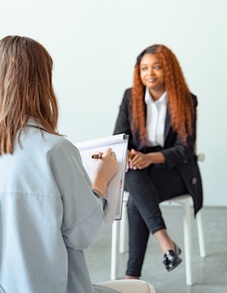 Lastly, the team was intentional with the theories included in the video series. As a group of diverse counselor educators, we shared which theories we covered in our classes and found that we overlapped with six main theories; thus we created videos for each of the following theories:

The cohort is currently in the post-production phase of this process. To enhance the video series, we plan for the client to review the videos, reflect on their experience, and share their feedback with us. This reflection will be part of the video series and will provide viewers insight into the client’s interactions with the counselors. After receiving the client’s feedback, the videos will be edited, captioned, and made available through NCDA.

Our primary goal in creating the series was to ensure counselor educators could use the videos to demonstrate theoretical applications. Instructors will be encouraged to use the videos to supplement course readings and provide students with real-world counseling examples. Also, these videos may be beneficial for career center staff training. Career centers can utilize the videos to expose staff to theory and theoretical applications. We plan to create a curriculum manual to include the project background, overview of theories, and facilitation questions for each video.

One of the biggest lessons the cohort learned was the importance of conducting a thorough intake interview that includes a cultural component. The client recognized the impact of having the opportunity to integrate his cultural identities while discussing his career concerns. In addition, the cohort observed how the identities of the client and the identities of the counselor influenced the therapeutic process. For example, our client identified as African American, and he expressed experiencing a mutual unspoken understanding when meeting with the counselor he identified as sharing his racial identity. During that session, he described the impact of his heritage, and the cohort observed a powerful interaction between the two of them, as they connected on a pivotal moment in his life. It is important to note the cohort did not provide the client’s cultural identifiers to the counselors for the first two sessions. We did witness a session where the client’s transgender identity was not recognized, and the client described the difficulty of not feeling affirmed and encouraged to share that part of his identity.

As this project moves ahead in the post-production process, we anticipate gaining additional insights into both the method used and the session outcomes on the client’s career development. The cohort aims to edit and publish the video series. They hope to create a complementary workbook to help career professionals in reflection exercises that correspond with the video series.

Tiffany P. Brooks, PhD, APC, NCC, is an assistant professor in the School of Professional Counseling program at Lindsey Wilson College in the online Counseling and Human Development program. Tiffany worked with college students in career, counseling, and residential environments, as well as with children utilizing child-centered play therapy in school and agency settings. Currently, she teaches multiple sections of career counseling and clinical experiences every semester, while clinically seeing adolescents and adults via secure telehealth with Resonance Counseling Center in GA. Her specific research interests include counselor identity development, play therapy, at-risk children, career counseling, and multicultural competence, particularly Black ally identity development. She is actively working as a part of a mother scholar collective who is currently researching the effects of the pandemic on academic scholars of young children. She can be reached at brookst@lindsey.edu

Yas (Djadali) Hardaway is a National Certified Counselor and a Certified Career Counselor. She has worked in the career development field since 1999, across multiple universities in the United States and transnationally. Yas currently serves as the Executive Director of Career Services at Pepperdine University's Graduate School of Education and Psychology, where she also teaches as a Course Mentor and Adjunct Faculty in the Psychology Division. She received her Master of Science and Education Specialist degrees in Counseling from The Florida State University and her Bachelor of Arts degree in Psychology from the University of Kentucky. She can be reached at yas.hardaway@pepperdine.edu

Marian Higgins, Ph.D., has an extensive higher education career advocating for diversity, equity, and inclusion (DEI) in college and university settings. She is the associate dean for culture, equity & inclusion in the J. Mack Robinson College of Business at Georgia State University. She previously served in career services at various institutions including coordinating the DEI initiatives for the University of Georgia Career Center. Marian is a licensed professional counselor who utilizes her counseling background to effectively address equity and inclusion issues. She is an experienced speaker who enjoys speaking about the intersections of career development and DEI. She can be reached at mhiggins17@gsu.edu

Angela Weingartner is an Assistant Professor at the University of Northern Colorado and has her Ph.D. in Counselor Education and Supervision. She has taught the Career Counseling Theory and Assessment course for the past 5 years and attended the NCDA Counselor Educator Academy. She is a licensed professional counselor, a nationally certified counselor, a member of the National Career Development Association and is a MBTI certified practitioner. She can be reached at angela.weingartner@unco.edu

This sounds like a fantastic and really helpful project. As a counselor educator, I am always looking for videos that showcase good career counseling and connection to theories. This reminds me of a video series called Life's Work: Four Approaches to Career Counseling by Cambridge Documentary Films from early 1990s--it was a "real" client who spoke with 4 very different career counselors about her career dilemma and I used in classes for many years but it's somewhat outdated and was not available on computer--it was always useful for discussion and giving students a sense of what career counseling could be and how different counselors and their approaches either resonated or did not (this included the connection between racial identities). It did not make the link to theories, which makes your project so valuable. Good luck and I can't wait to see the videos.