Most notable in the counseling context is the counselor’s awareness of
self as an agent of change. (Sullivan et al., 2005)

During the Progressive Era (1900-1925), women were limited in their societal influence and power. Resourcefully, they capitalized on relational networks and through them enacted labor-related legislative changes. Several organizations helped strengthen shared objectives of creating fair labor practices and broadening access to education and training for all types of work for women and others who are underrepresented (Abbott, & Breckinridge, 1917; Johnsen, 1921 & 1926; MacLean, 1897, 1913, 1916; Ehrman, 1916). The YWCA, the Women’s International Group (Oldenziel, 2000), the National Women’s Party (National Women’s Party, n.d.), and the more radical feminist groups such as The Society for Heterodoxy in Greenwich Village (Schwartz, 1986) were some groups providing support for equity in type of work, pay, and workplace conditions. Members of these networks frequently crossed paths and through their joint, organized efforts, women gained collective power. This resulted in legislative change that continues to impact today’s world of work and the developmental trajectory of the career services profession. This article examines some of these visionary change agents.

Perhaps one of the most outspoken labor rights advocates at the turn of the 20th century along the Northeastern coastline was Mary Van Kleeck (1908; 1914; 1915).  She published her first study in 1908 on the millinery trade and emphasized the lack of child labor rights and provision of a living wage to women, children, and immigrants. Specifically, she noted that Hebrew and Italian groups were paid the least amount of money per lot of work. Viewing firsthand unsanitary and deplorable living conditions without fair wages, she began cataloging her observations. 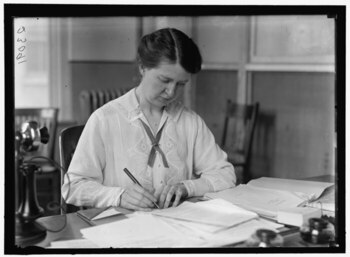 Van Kleeck directed a study team including Louise Odenkrantz (who served as a statistician), Alice Barrows and Elizabeth Meigs (who collected the massive amounts of data). This team used a mixed methods approach. The lives of poverty-stricken immigrants were documented in photographs and lengthy, transcribed passages describing firsthand accounts of immigrant women and children’s stories. They also analyzed large data samples using quantitative methodology. This helped expose the exploitation of factory owners and tenement house slumlords of immigrants and children at home after legal working hours had ended.

Sophia Breckinridge (1915) reviewed and extended Van Kleeck’s efforts. Breckinridge argued for the same minimum wage for everyone, regardless of gender (Figart et al., 2002). This conflicted with the National Women’s Party platform that proposed the Equal Rights Amendment for women, advocating for higher women’s wages. Breckenridge and Van Kleeck argued that wages were based on workers’ bargaining power. If all genders fought to reduce the pay gap, men and women could advocate for the same thing, together. Given women’s limited power to seek and obtain higher paying work, women were at an inherent disadvantage to access higher-skilled and higher-paying work (Figart et al., 2002). One way to overcome power and privilege deficits could be found in the collective bargaining of many voices through these early labor systems.

Leveraging Power through Publications and Legislation

Through Edith Abbott’s relationships with University of Chicago colleagues Breckinridge and Talbot, an early article on women in industry was published (Abbott & Breckinridge, 1906; Calghoun, 2005). “Women are becoming self-conscious and irritable; men are sometimes obstructive, frequently incredulous, occasionally patronizing and often unsympathetic” (Abbott & Breckinridge, 1906, p. 16). Using data from the twelfth census, the authors examined women’s employment rates in 1890 versus 1900. Clear distinctions were made between unpaid domestic work (i.e., caring for one’s family) and paid work for others outside of the home, the latter counting toward the paid employment numbers with particular attention to women’s (Abbott & Breckinridge, 1906) maltreatment across industrial work.

More women and men were noted to be in trade and transportation sectors with many women entering all career fields with declines in those that were traditionally feminine. In their conclusions, they advocated for competition between men and women in the marketplace across all occupations not only those traditionally relegated to women or those dominated by men. Grace Abbott, sister of Edith Abbott, was able to build on this research and while working at the Children’s Bureau in 1917, she attempted to pass protective child labor legislation. This was later struck down by the Supreme Court but passed as a child labor amendment under President Roosevelt in 1938, although it was never ratified (University of Chicago Library, 2006; History Nebraska, 2022). She was also an advocate for the Sheppard-Towner Act which provided healthcare assistance for women and children (History Nebraska, 2022). This body of research and advocacy began to pave the way for additional legislative efforts.

Florence Kelley, a suffragist who also fought to reduce racism, advocated for the eight-hour workday and protection of children’s labor rights. She served as a chief factory inspector between 1892-1897 and as a special agent for the Illinois Bureau of Statistics reporting on needle trades. Kelley wrote extensively about the 19th century industrial movement across the entire country noting conditions in Southern cotton mills, Northeastern needlework, Midwest glassblowing, and mining in Virginia. Later, as a member of the Illinois Bar, she actively legislated for the right to leisure for women, children, and minorities. She noted that Pennsylvania had the worse treatment of children and argued for better working conditions with several popular marches, including one to President Roosevelt’s house. Legislation was proposed to limit children’s work weeks to 50 hours and no more than nine hours of work per day. It also required education for children until 16 years of age. Through efforts lasting nearly 15 years, the Walnut Bill passed in the Pennsylvania House but died in the Senate Judiciary Committee.(Locklear, 2022). This endeavor was important because it brought together multiple grassroots groups to form the Pennsylvania Child Labor Association and was partially successful in gaining recognition and public awareness of working conditions after passing the House.

Any change in favor of those marginalized in a culture requires overcoming multiple barriers. It also requires a collective mindset that embraces change and input from multiple sources. Early women influencers in the industries of social work and nursing embraced change (Muncy, 1990). Early women visionaries overcame barriers using this mindset and via social networks, serving as mentors to one another to induce workplace access and change. In addition, they collected data and disaggregated it. Pay among women and children, along with their appalling living conditions were in direct contradiction to pay and quality of life among white men in the dominant culture.

Looking through the lens of the therapeutic relationship, meaningful change occurs when the therapist and client are responding, collaborating, and joining together (Sullivan et al., 2005). Today’s career practitioners employ these skills in client sessions. Beyond the session, practitioners can employ these relational skills through mentor programs. These relationships can be sought in all areas of work including apprenticeships, trades, and non-traditional fields where employment data indicate less diversity. Such programs can lift and support men and women of color, non-conforming gender identities, and members of the LGBTQ community for a more inclusive world of work.

This is the third in the series of herstorical  articles  (i.e., a history of pioneering women in the career development field written by a woman), designed to broaden and deepen our understanding of our professional roots. Read the first two articles in Career Convergence:
We All Want to Change the World: An Introduction to the Series, Early Women Pioneers in Career Development  (Patterson-Mills , 2021)
In the Trenches: Women Vocophers’ Contributions to the Career Development Field (Patterson-Mills, 2021).

Locklear, J. M. (2022). The rise of the PCLA: Child labor reform in Pennsylvania. Temple University Special Collections Research Center: In Her Own Right, a Century of Women’s Activism, 1820-1920. http://inherownright.org/spotlight/featured-exhibits/feature/the-rise-of-the-pcla-child-labor-reform-in-pennsylvania

Van Kleeck, M. (1915). Facts about wage-earners in the United States census: A series of diagrams used in the course on industrial conditions in the New York school of philanthropy. The Russell Sage Foundation.

Sarah Patterson-Mills, Ph.D., LPC, is the Assistant Dean of Counseling, Behavior Analysis and Undergraduate Social Work, the School Counseling Program Chair, and Associate Professor in Counseling at Lindenwood University. She earned her doctorate at St. Louis University in Counseling and Family Therapy in 2010, is a licensed therapist with over 15 years of experience working with a variety of clients across the lifespan, and a 7th -12th grade school counselor. At Lindenwood, she teaches a variety of school counseling and career counseling courses. She serves as Co-Chair of the NCDA Ethics Committee and is the editor of Ethics in a Nutshell in Career Developments magazine. Her research interests include supervision of school and career counselors and in feminist counseling theory and practice. She can be reached at spatterson-mills@lindenwood.edu.

Very interesting article. Thanks for creating it.

You did a great job on this article as with the other two you've written, Sarah. I look forward to seeing the draft of the next in the series when you get it done. No rush as all works of greatness take time.

Dr. Patterson-Mills, I have enjoyed reading this article series. Thank you for bringing attention to this herstory.

what I find interesting in this article is how early female visionaries sought to overcome barriers in a way that was undeniable. There had to be proof of a condition that required change. The women used their social networks to collect data, to show where conditions for women and children were in "direct contradiction to pay and quality of life" to their counterparts. This method helped women and children overcome various inequality through the use of networking. So in today's world the same holds true, when people band together for the greater good, change happens.