For years, researchers have been trying to discover the relationship between workload and job satisfaction. The reason why is simple: higher job satisfaction results in increased productivity, organizational commitment, and retention. This direct relationship has been elusive because, remarkably, some people actually enjoy performing a whole lot of work, while others are much more comfortable with less on their plate. I aimed to figure out why, and discovered the relationship in a concept called “work density.”

To begin to describe work density, and why understanding it is so very important to every organization, it may be best to see how the dilemma was first solved. There are a couple of key points to consider: First, reflect upon the fact that a thousand-pound tree floats, yet a single grain of sand sinks. Sounds like basic high school science, and indeed mass over volume is. Perhaps the relationship between workload and job satisfaction is not a direct relationship, but rather related to the density of the workload.

Next contemplate the fact that it is often a very little thing that occasionally moves us over the edge from being relatively satisfied to being dissatisfied. “Oh, and I need that by tomorrow morning at 8:00…” This implies that the workload you experience and the tools you have to tackle them are incremental, and that within the relationship there is a breaking point. 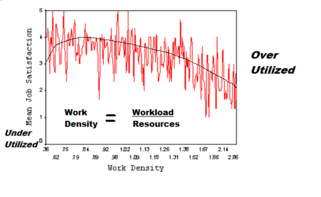 The concept of work density is defined as the ratio of one’s workload over the resources he or she has available to perform that work. Much as an object’s tendency to float or sink depends upon its density, so too does a person’s work density describe whether or not they will be satisfied. In the chart above, a very strong inverse relationship is noted between job satisfaction and work density (at the 0.01 alpha level). To understand this relationship, let’s first understand the components of work density and then look at the values and shape of the findings.

Workload includes the volume, difficulty and complexity of the work, the timing, sense of urgency, and budget associated with the work, and the overall work scope and variation. Resources include everything one has to accomplish the workload at hand including time, financial support, and staff, as well as training, social support (from supervision, peers, and mentors, etc.), education, and experience within a given environment and with given benefits. The relationship between these two is directly related to the job satisfaction that is experienced. So the things that affect job satisfaction are indeed within the control of an organization. The key to job satisfaction is considerably more than simply pointing at the numbers after the dollar sign.

Now let’s take a look at the curve in the chart and its meaning for the populations it describes. Let’s think about what work density values really mean. Since this is a simple ratio, then a work density of 1.00 must occur when the amount of work we have to perform (workload) is exactly equal to the resources we believe we have to perform that work. If we were to take on (or be given) more work, our work density increases. This increase also occurs if we were to lose some of the resources we thought we had at the same work level. This may come in the form of losing staff or budget or the time we have to perform the work, or in finding that our experience is not as aligned with a particular job as we had originally thought. Not surprisingly, as work density grows from roughly 1.00, over-utilization begins to grow and job satisfaction begins to decline.

Similarly, if we were to lose the amount of work we had to perform, or were to gain resources without any additional increase in responsibilities, our work density would fall. This could happen with the completion of a degree, a newfound mentor, and additional training. For those who experience a decrease in work density below roughly 1.00, under-utilization begins to occur and job satisfaction begins to decline. If you are currently over-utilized, lowering your work density may be what you are looking for – up to the point where your maximum job satisfaction is reached. Any reduction beyond that point will result in a reduced satisfaction due to under-utilization.

Looking at the overall shape of the curve is also important. The maximum job satisfaction experienced occurs when people feel they are given slightly more to do than they think they can perform. When such an analysis is prepared for a specific organization, opportunities suddenly become apparent. Understanding the driving factors of work density will allow for specific actions to be identified that induce a desired work density shift.

For some sub-populations the workload component of work density is the driving factor while for others, it is the resource measure. Specific analyses prepared for an organization will highlight the differences between demographic populations and provide executives insight into where they should spend their limited budget and efforts.

Although simple in concept, the implications of these findings are both significant and applicable to nearly every business today. Work density analysis allows the organizational leader to observe their population in two distinct strata – those who are over- and those who are under-utilized. When I told the president of a Fortune 50 company that he could increase job satisfaction (i.e. increase productivity, organizational commitment, and retention) by simply giving his under-utilized population more to do, this sensible logical businessman was downright giddy! By giving the over-utilized population additional training (increasing resources) and delegation tools (reducing workload), further increases in job satisfaction could also be mustered!

The bottom line to any organization and individual alike is this: You are in control of the combination of things necessary to maximize job satisfaction. Evaluating the work density of a company or an individual is a relatively simple thing to do. The results of the evaluation will provide the roadmap to a successful transformation to a more satisfied, more committed, longer tenured, and more productive workforce.

Robert Travia holds a PhD in Organizational Management, an MBA, and a BS in Engineering. He is the pioneer of the work density concept and founded Career Realization LLC to offer individual and organizational consultations, work density analyses, and speaking engagements. As a strategic sourcing leader of a Fortune 50 company, Rob has gained insight into the successful strategies for career development cultivated over 15-plus years in aerospace and automotive operations management, approaching career development with engineering logic. Dr. Travia may be reached at DrRob@CareerRealization.com; visit his website at www.CareerRealization.com.