The authors recently returned from a trip to Korea where we implemented a one-week intensive career leadership academy. In this article we would like to discuss a career development model that we used to conduct the program with 30 Korea University (KU) students and its implications for the 7-12 setting in the US.

South Korea is “on the rise”. Once a country that received economic aid from the United Nations, it has evolved from being a recipient of aid to a contributor. South Korea stands out for having a strong economy, high scores on the Program for International Student Assessment (PISA) exam, and an economy thriving because of its human capital, not its natural resources. There are a myriad of factors driving this success including cultural homogeneity, geographic density, and collectivistic values.

High school students in Korea, however, often study 14 hours per day. They begin the “easy” part of their day by attending school and then often attend tutoring centers in the evening. The intensity of academic expectations is such that the tutoring industry is now monitored by inspectors to assure that students are home at the 10PM government mandated curfew. The primary reason for this intense focus on education is the college entrance exam scores that determine which university the student will attend and what major is selected for the student.

Since the advent of the No Child Left Behind Act (NCLB), U.S. education policy has driven an increasing focus on high stakes testing resulting in both positive (increased accountability, development of measurement outcomes) and negative (increased anxiety around testing, curricular changes, and a decrease in student self-directness and creativity) outcomes. Our experience with Korean students may suggest an effective intervention strategy while also illuminating potential hazards of focusing on testing at the expense of self-reflection and personal knowledge.

“Seoul is such a crowded city that there is no time for self-reflection. This is the first time I ever thought of myself, the first time I ever thought of a career as mine.” (KU student who attended the career camp). This quote was in response to the question “For you, what stood out most about the camp?” and captures a common theme expressed by students; that they have not viewed career as their own but rather the product of external factors (e.g., test scores, parental choices, societal needs).

The one week career academy program was organized by KU Career Services and funded by the government. KU Career Services advertised the program on their website, and 30 KU undergraduate students representing all grades registered for the program on a voluntary basis. The program was developed using the Human Agency Based-Individual Transformation (HABIT) model based on the human agency theory of Bandura (2001, 2006). Human agency is “the capacity to exercise control over the nature and quality of one’s life” (Bandura, 2001, p.1). Human agency helps individuals foster their adaptability, self-renewal, and development, which are vital to one’s career development.

The following four core-features of human agency were addressed during the program (Yoon, 2011; words in parentheses indicates Bandura’s denomination).

Self-reflection is related to thinking about one’s values, interests, life pursuits, and past events and behaviors. Students had a chance to deeply reflect upon themselves through various activities, such as the Enneagram, identifying values, career style interview, and constructing a mission statement.

Forethought is thinking about future events and consequences of anticipated actions.

The forethought portion of the camp involved such activities as exploring career options, experiencing a guided imagery, developing a list of dreams, and creating life book chapters.

The clear intentions step involves generating strategies, setting goals, and developing plans. Students generated strategies using the SWOT analysis with their missions, values, and visions in mind. After that, they developed goals and plans that are aligned with the strategies.

Execution involves implementing plans, monitoring the progress, and motivating oneself toward achieving the goals. The class generated strategies for better execution; and one of their strategies was to stay connected to one another in the program and hold each other accountable for their success. 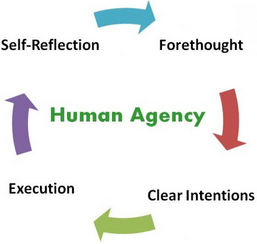 The HABIT model is cyclical in nature; therefore, after implementing what one planned, it is desirable to re-engage in self-reflection and think about the outcomes of actions. Data from a time-series experimental study with the former participants of the career leadership academy evidenced that the participants’ human agency, hope, career decision self-efficacy, and vocational identity had increased, and their dysfunctional career thoughts had decreased after attending the program (Yoon, Ahn, & Hutchison, 2012).

Implications to the 7-12 Setting in the US

Working with Korean students has given us a unique opportunity to understand some of the long-term hazards associated with high stakes testing. Students who have grown up in a test-oriented environment reported feelings of disconnection with their personal agency and ownership of the career development process. Incorporating Bandura’s theory via the HABIT Model seems to have a mollifying effect on this perceived disconnection. The model will be introduced to high school students in the US. Counselors who are interested in this initiative should contact the second author.

Yoon, H. J., Ahn, S. S., & Hutchison, B. (2012). The effects of a career development program based on the Human Agency Based Individual Transformation model. Unpublished paper.

Hyung Joon Yoon, Ph.D., GCDF, SPHR, is an Instructor of Education at the Pennsylvania State University. He teaches the Career Development Facilitator (CDF) course and the CDF Instructor (CDFI) course as a CDF Master Trainer. He has developed and co-developed career development models and assessment tools through research, including the Human Agency Based Individual Transformation (HABIT) model, the Assessment of Human Agency (AHA), the Hope-Centered Model of Career Development (HCMCD), and Hope-Centered Career Inventory (HCCI). He earned his Ph.D. degree in Workforce Education and Development at the Pennsylvania State University. Hyung Joon can be reached through his email at drmtree@gmail.com.

Brian Hutchison, Ph.D., NCC, is currently an Assistant Professor, Coordinator of the School Counseling Program, and International Studies Fellow at the University of Missouri – St. Louis. His scholarly work is focused on the study of social class bias in the delivery of school counseling interventions, international school and career counseling, counselor feelings of social class dissonance as it applies to their work, and the delivery of career interventions that incorporate the concept of human agency as it impacts the career development of underserved and international populations. Brian is an active member of NCDA, ACA, and ACES at the state and national levels and is a member of the Journal of Counseling & Development Editorial Board. He received his Ph.D. in Counselor Education & Supervision from Penn State University in 2009. Brian can be reached via email at hutchisonbr@umsl.edu.